For a more comfortable reading, and because some screenshots include small-sized details, I recommend to visit this website on a wider screen.

TransFeed is an application developed as part of a research project conducted at A.N.R.T., which investigates the agregation, confrontation and archival of online documents.

The increase of information websites seems to allow every reader, at the cost of minimal efforts, to consult a wide variety of sources: all it takes is a few letters written in an address bar. But the list is now so long that it rather increases the cognitive load brought up by wandering in our digital media landscape, this "feeling of being overwhelmed with information and being unable to find the relevant materials in this flood of ephemeral things".

TransFeed implies that if knowledge is information put into movement, manipulated, it is necessary to find places that allow this manipulation. Its purpose is to initiate a reflection on the forms that would suit this tool, and to question the levels of relation between texts.

This site gradually dissects the multiple facets of the application. Sources of quoted articles are to be found at the bottom of the page ↓.

A few notes are collected about the architecture and the different relations between texts which triggered this reflection, they are not essential to follow the thread but can prove themselves useful in understanding the sought after porosity, click here to read it ↓. You can also watch a video of TransFeed by following this link ↓. Otherwise, keep scrolling.

An automated collection of articles, whose sources can be added then adjusted at will, address their fragmentation and bring them together in a common location.

TransFeed then standardizes all articles and harmonizes their appearance, which are often very uneven.

The aim is to substract their respective visual qualities from our perception of their content, and give each of these articles identical reading conditions.

There are two ways of entering those corpuses : by grid, or by list. The latter is a little more complete, the possible actions are displayed on hover.

It is possible to indicate an interest for an article, in order for it to be easily identified in the corpus afterwards.

Finally, these pages can be filtered and sorted quickly. 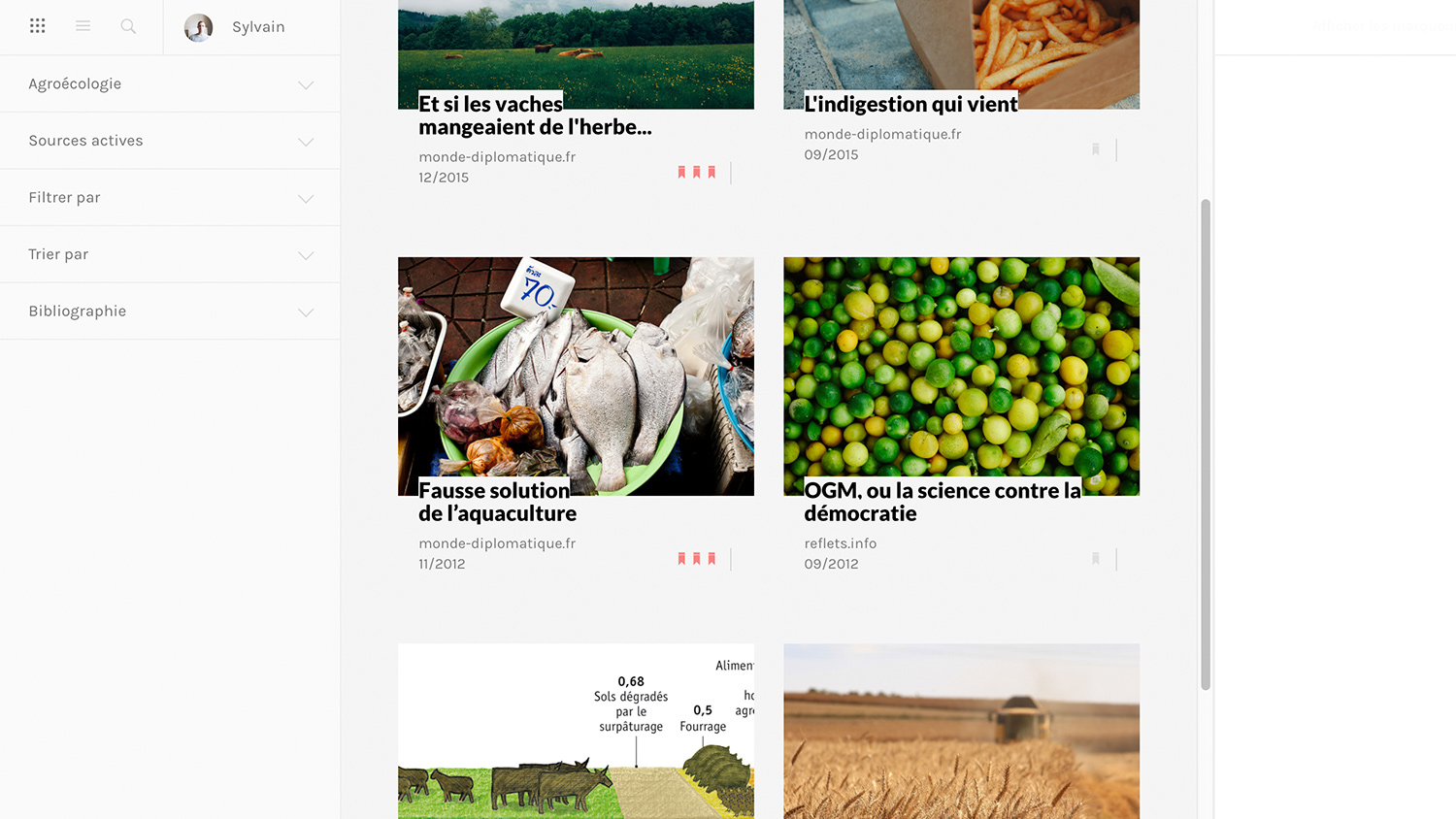 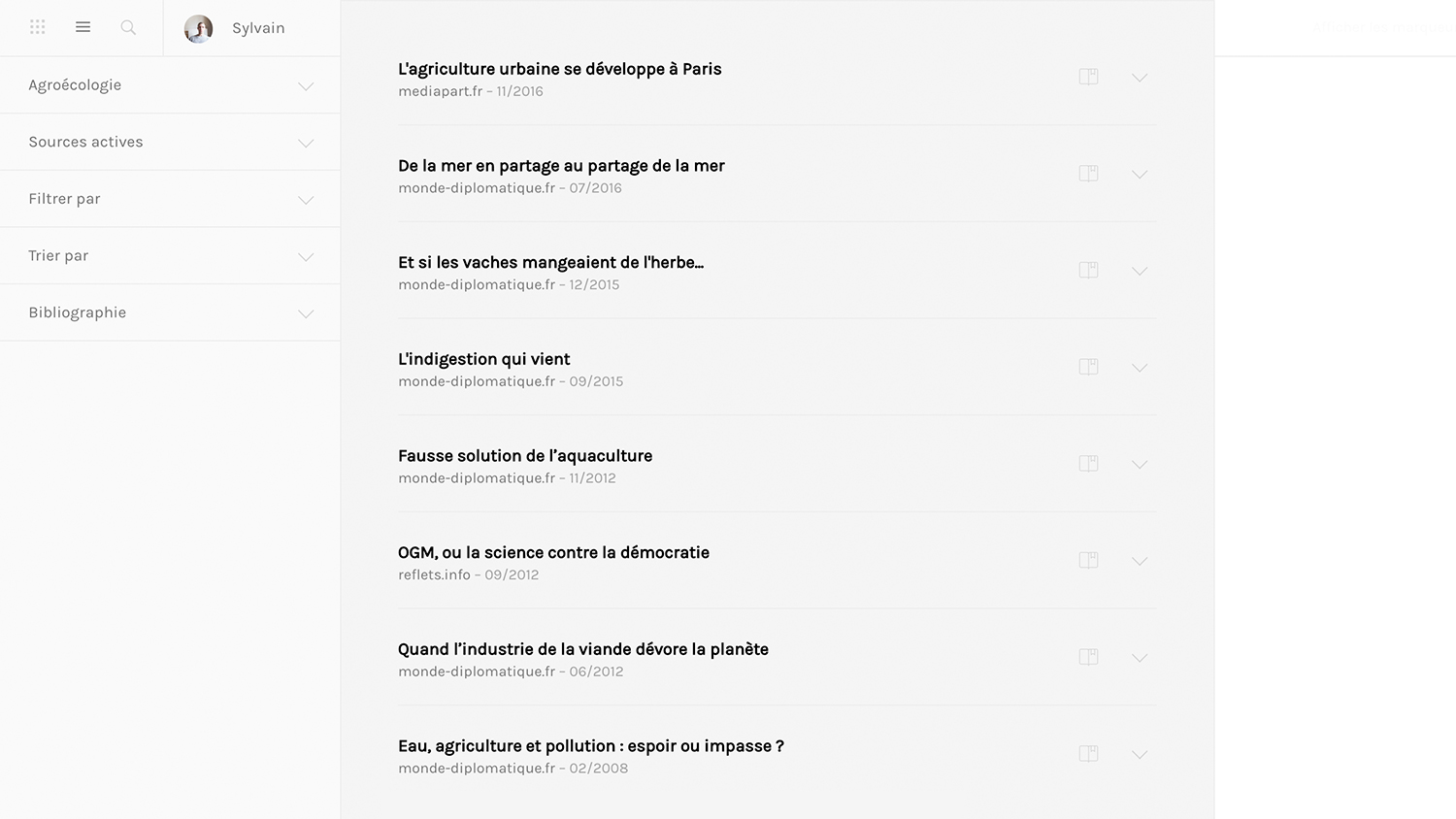 Articles are collected within reading lists.

By default, Newsfeed aggregates all articles published on the specified websites. It is also possible to put articles aside in a Read later list. Finally, Personal Lists automate the composition of reading lists: TransFeed will collect in these lists every article matching the given keywords and published on the active sources.

These classifications are not fixed, it is possible to re-distribute the articles within these lists at any time.

On click on an article, TransFeed switches to a reading mode.

A small alert indicates the opening of an old article, in order to keep a clear context of the article read.

The notes are shown contextually, on hover. The proper names, expressions or thematics can be searched on Wiktionary, which returns a short definition. 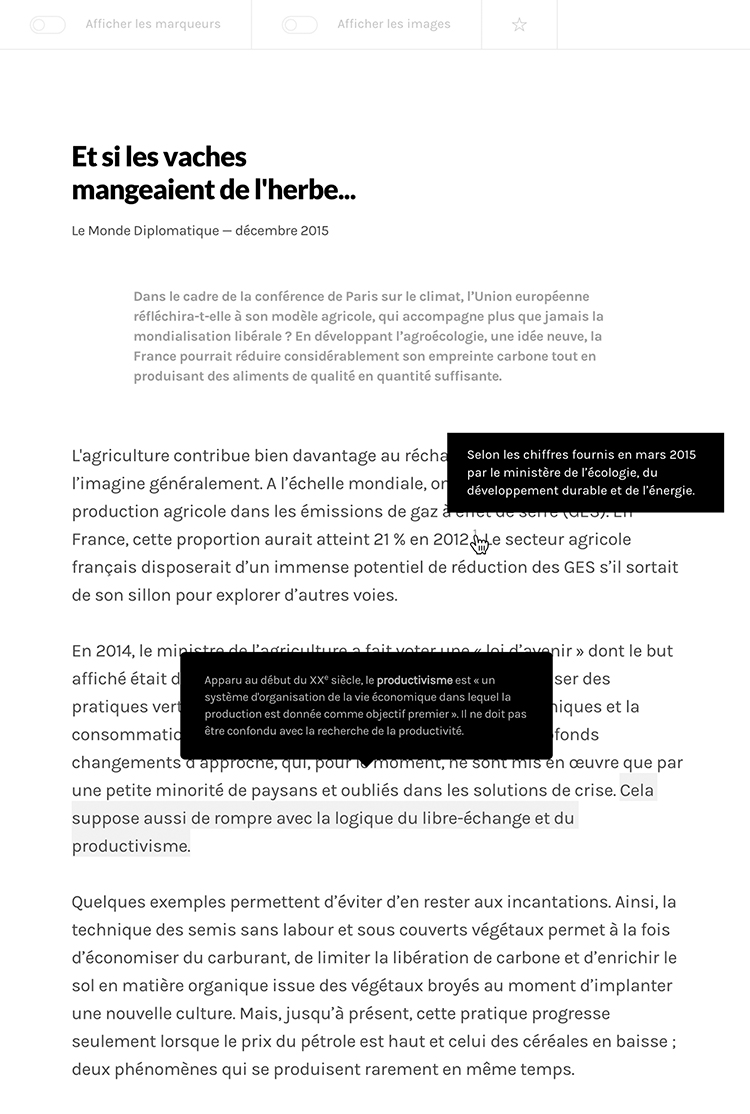 Displaying images is conditional, so that it doesn’t interfere with an immersive reading when they have a purely illustrative value. 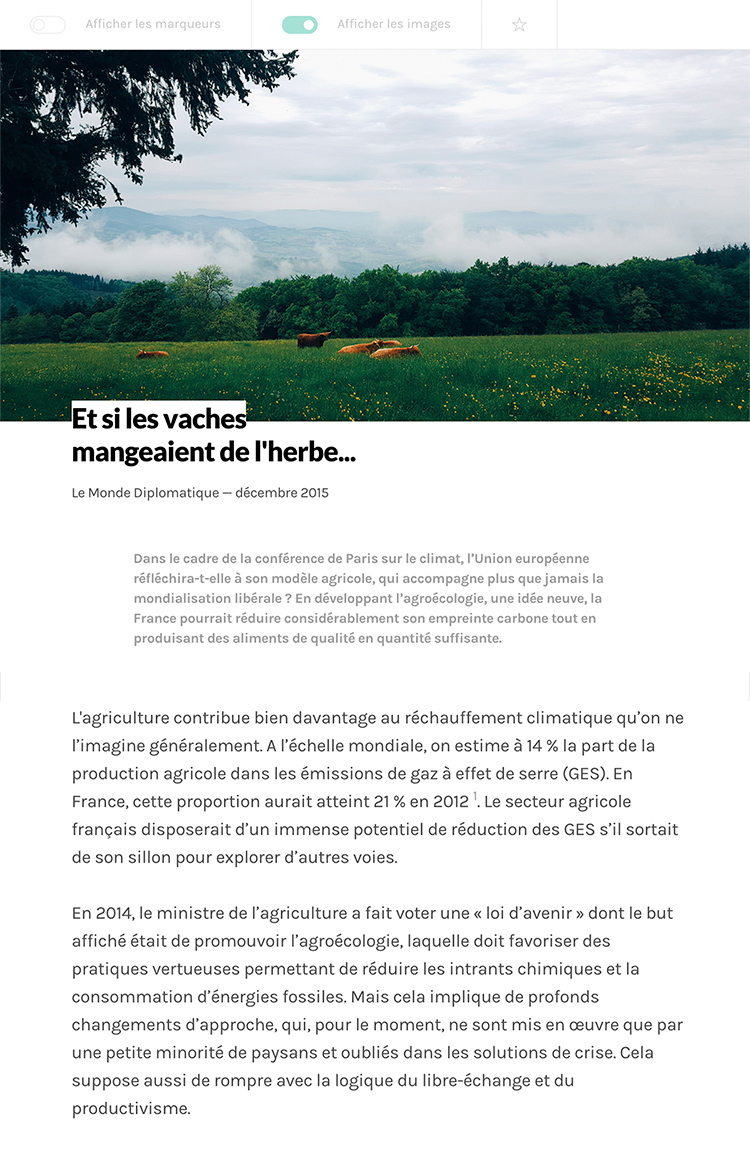 A global overview of the text, allowing the reader to view it whole as well as his current position in the article, can be displayed in parallel.

The cohabitation of these articles in the same place allows to quickly create new relationships between each of them.

These relationships are displayed on an overlay which, as well as for the images, can be shown or hidden at will.

This overlay displays the text’s baseline in the left margin, allowing the reader to associate a link to a specific line. 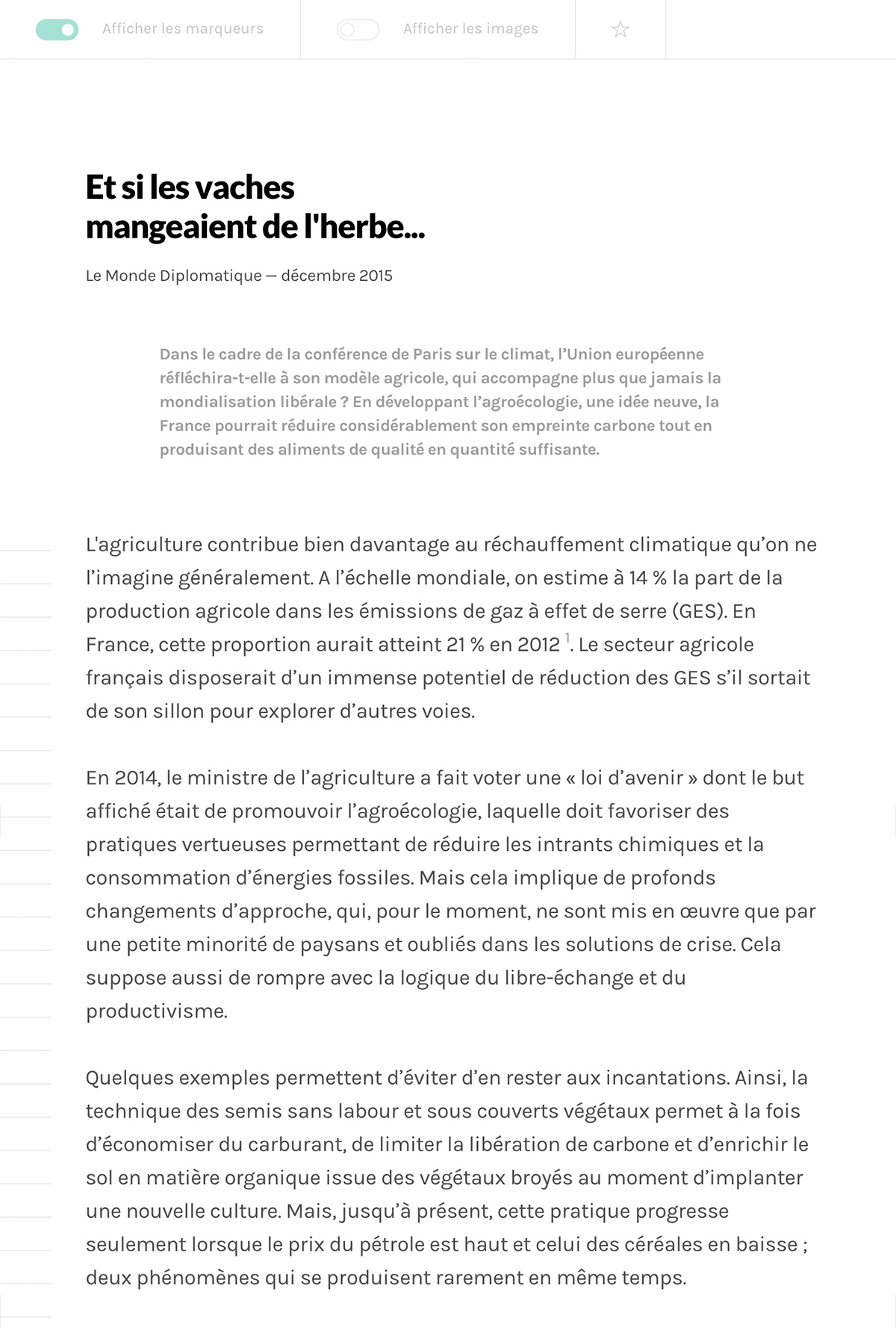 Once the overlay is displayed, it becomes possible to drag an article from the list to anchor it to a line and dynamically link it to the text being read.

On hover, the inserted marker displays a quick overview of the linked article.

By default, a single reading window is opened. However, it is possible to juxtapose two texts, when a link is opened for example.

This juxtaposition makes it possible not to lose the thread of a first reading, while allowing a complementary, comparative reading, etc.

When the main reading window is displayed, this action also becomes accessible via the list entries.

When two texts are displayed, it becomes possible to link but only an extract of one of the articles. This option is available on text selection.

On hover, the inserted marker shows an overview of the content of the linked extract.

On click on this marker, the article containing the quote opens at the extract’s level. A marker punctually appears in order to facilitate its identification.

These links are shown on the global overview of the article, so that they can be reached quickly.

On click on a marker, the text scrolls until it reaches the associated link. 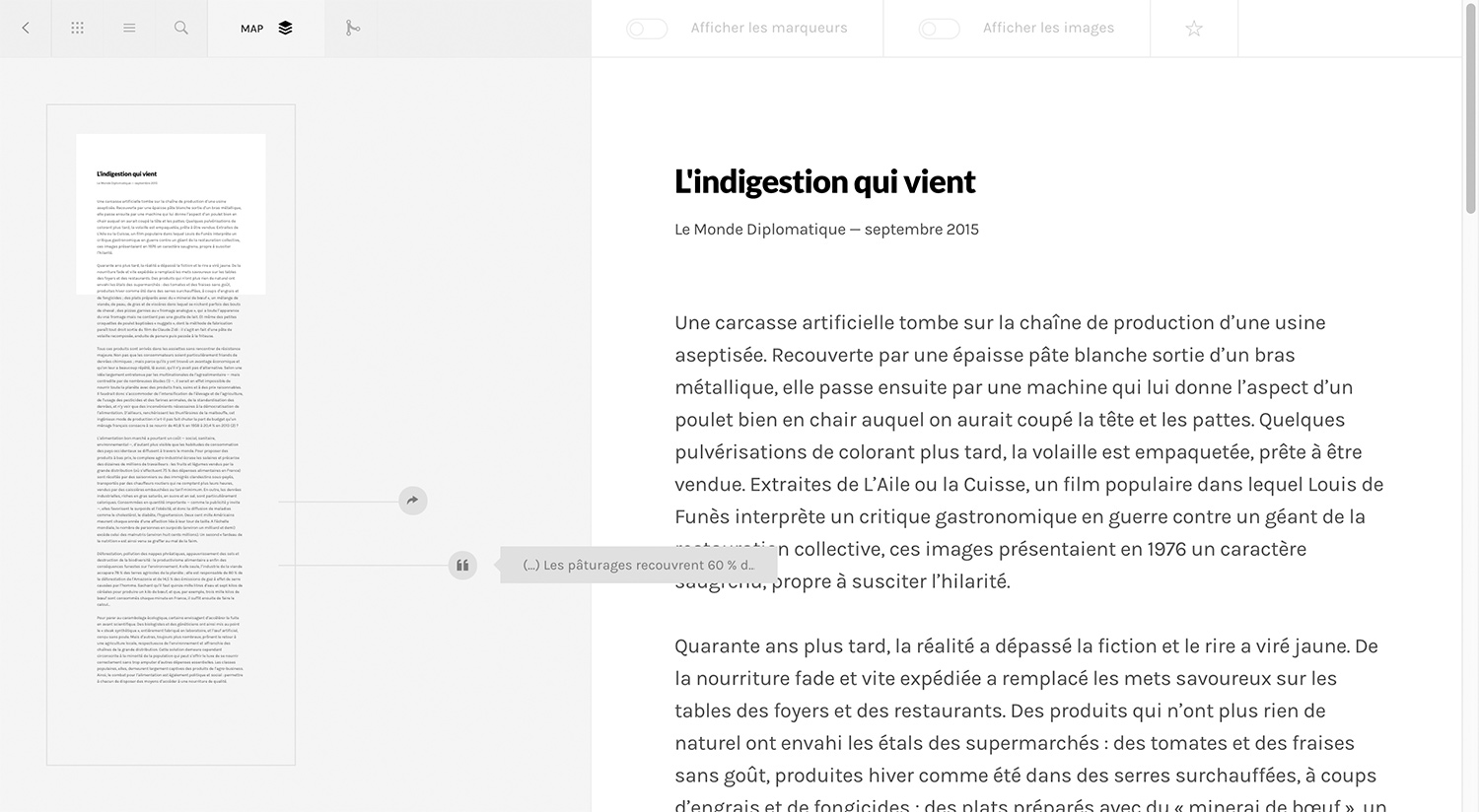 Reading lists are not the only ones that can gather groups of articles. It is possible to create subcategories, specific to a reading list or shared among several, as tags.

Existing tags can be associated with any article, or can also be created on the fly. 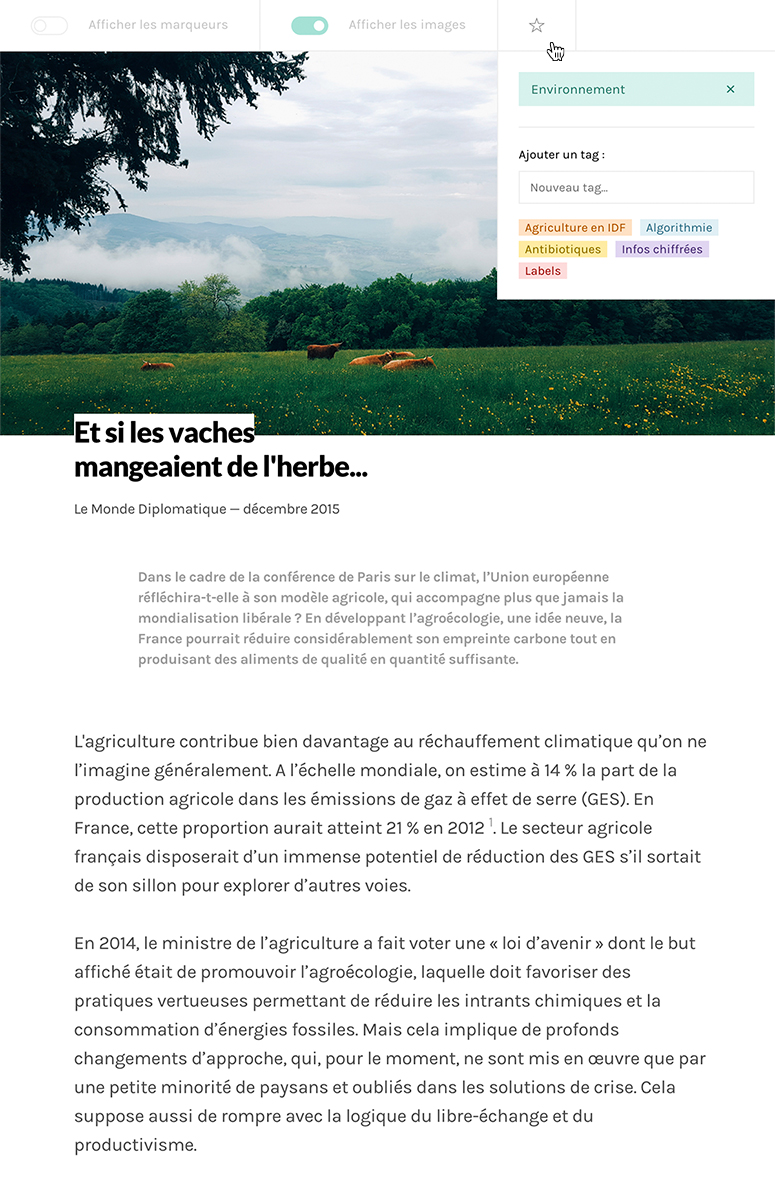 These tags can also be associated with parts of text only, in order to focus on the tagged information very precisely.

This action is available in the toolbar that appears when selecting text.

When markers are displayed, tagged extracts are highlighted. 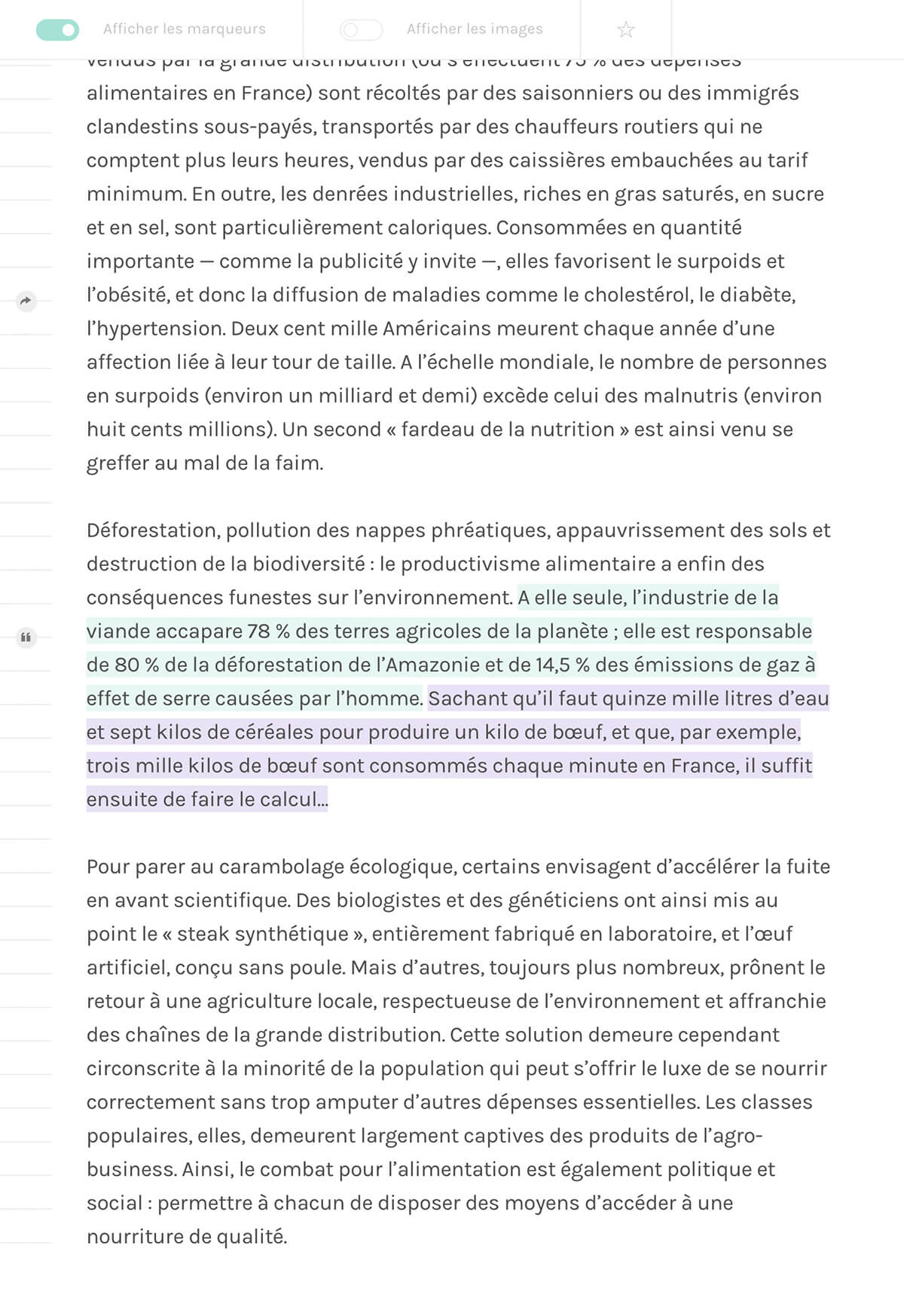 These tags are shown on the global overview of the article, so that they can be reached quickly.

On click on a marker, the text scrolls until it reaches the associated tag. 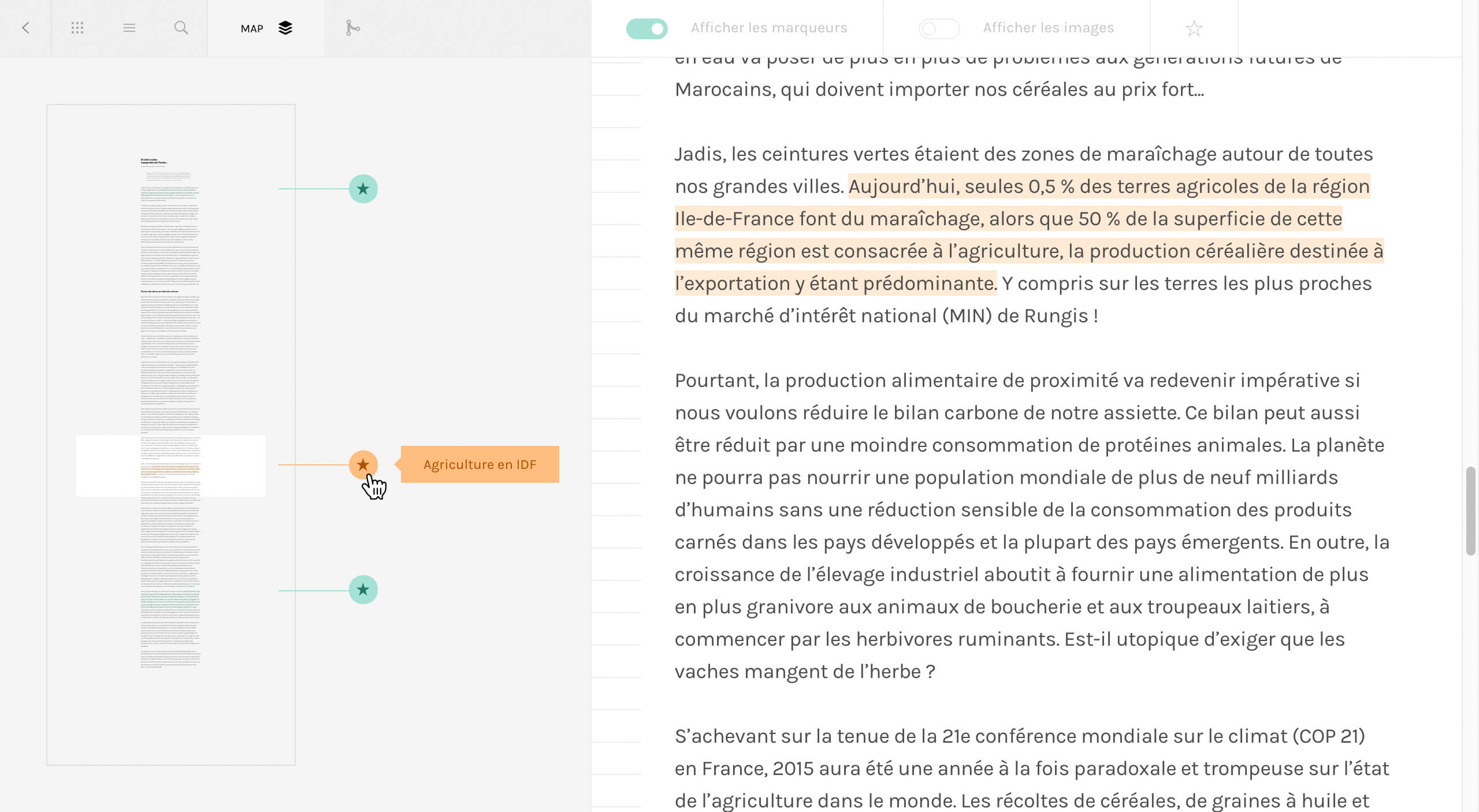 TransFeed is also interested in what confrontation, friction between these articles can produce.

Therefore, as the reading progress, it is possible to keep track of our associations of ideas, paths of thoughts, as paths.

Unlike tags, paths are direct, linear associations that need to be represented and read in a logical order.

These paths are a peculiar typology, the multiple extracts that compose them are shown in their logical continuity.

On click on a quote, the text scrolls until it reaches its position. A marker punctually appears in order to facilitate its identification. 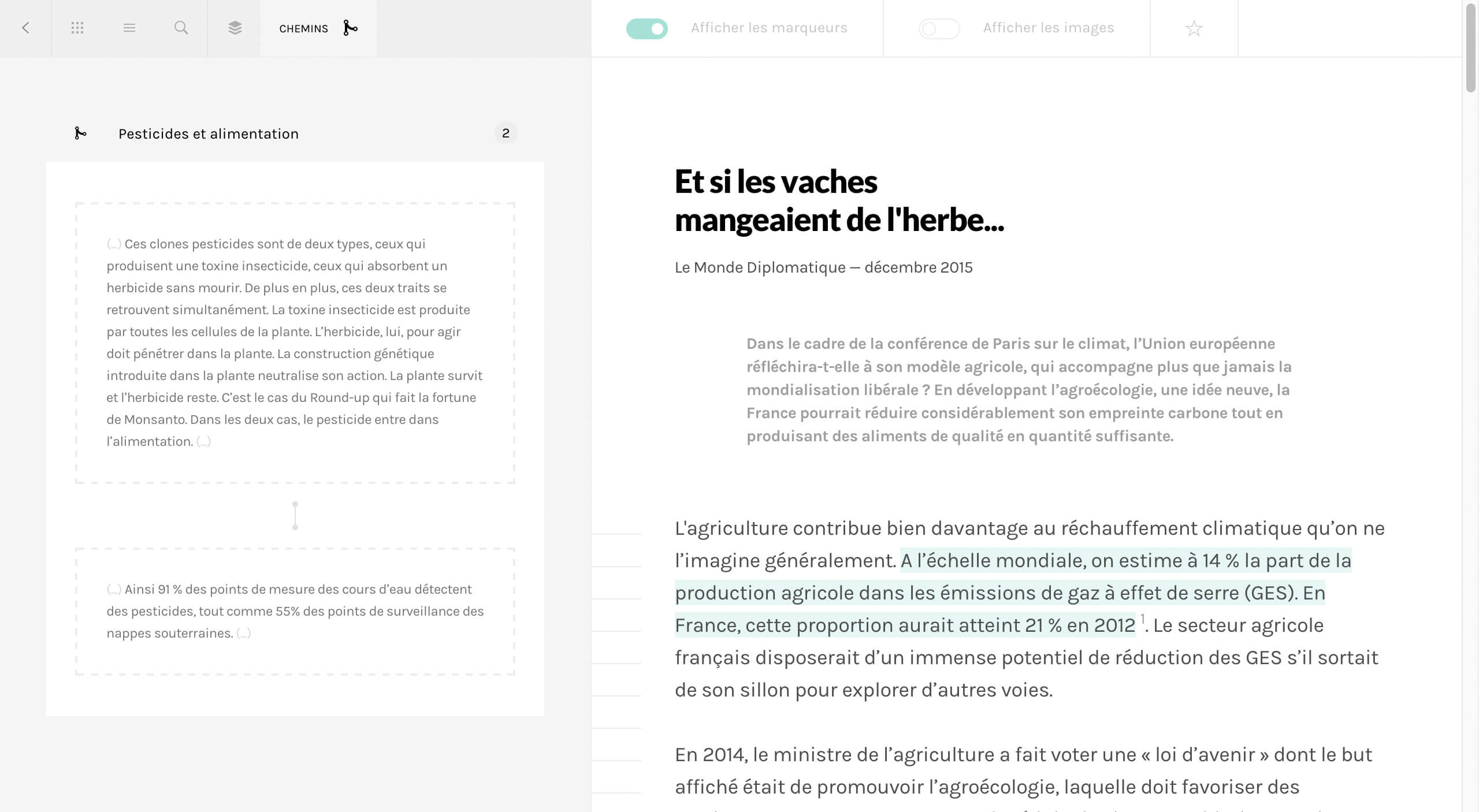 Finally, an overview of the status of these reading lists, articles, tags and paths can be found through the search tool. An input field allows to quickly filter the results.

The tags unfold to display all associated elements, articles or quotes. 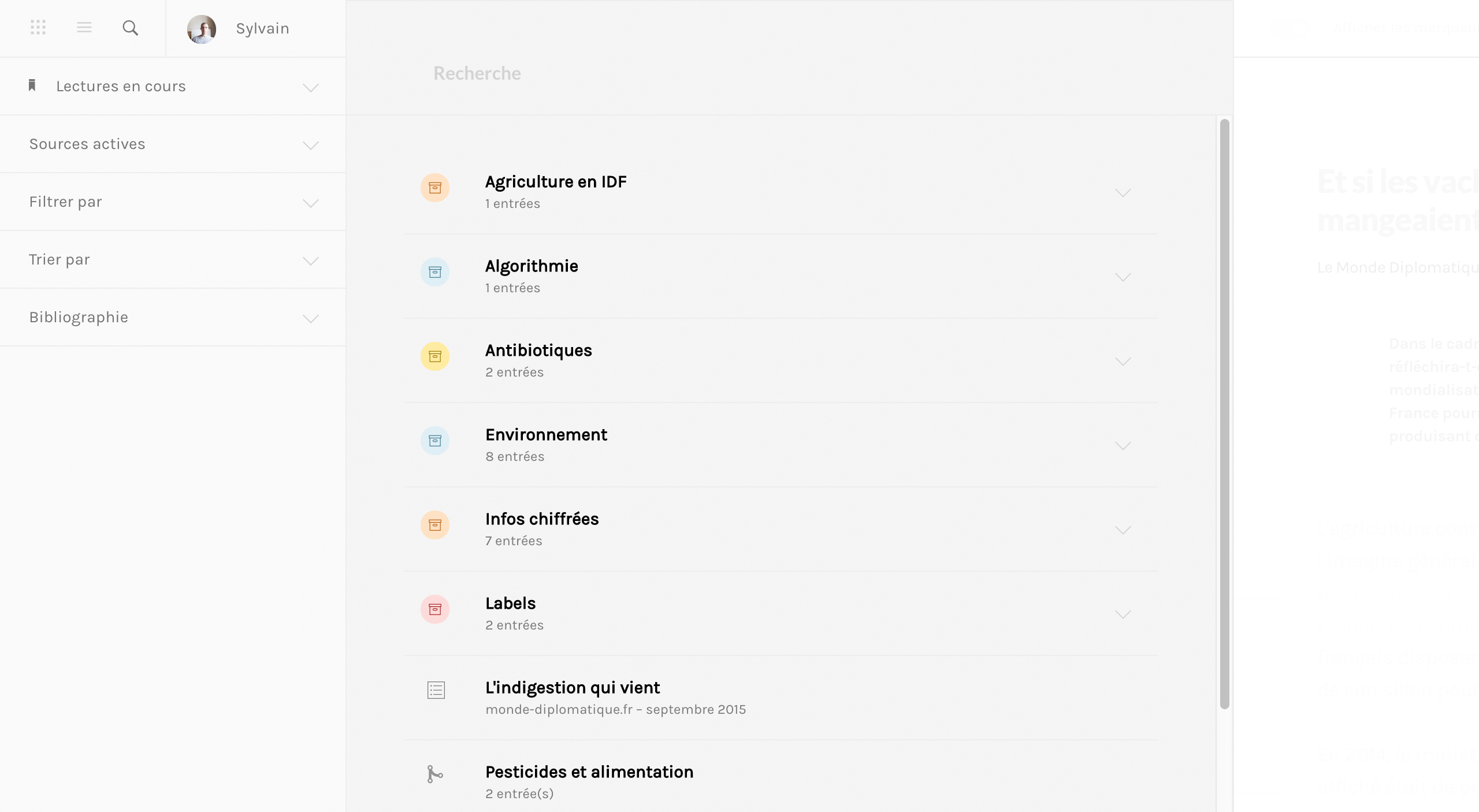 This video does not include all of TransFeed’s features, but provides a less segmented view of use than the succession of short videos in this thread.

The term intertextuality appeared in the 60s within the Tel Quel group. It encompasses all types of crossings between texts, relations between writings.

Every text is an intertext; Other texts exists within him, at varying levels, in more or less recognizable forms: those of the previous culture, those of the surrounding culture; Every text is a new mesh of past quotes. Meddle with the text, redistributed within him, pieces of code, formulas, rhythmic models, fragments of social language, etc., for there is always language before the text and around it.Roland Barthes

In 1982, Gérard Genette proposed to clarify this terminology in his book Palimpsestes, la littérature au second degré, introducing transtextuality, which he defines as follows:

Everything that puts a text in relation, manifest or secret, with other texts.Gérard Genette

And of which he specifies different forms, aspects of textuality, which define so many networks of relations.

Hypertextuality, relation between a text and another text (an anterior one, called hypotext) to which it is grafted, by transformation (rewriting) or imitation. In a context of digital writing: direct relation between two texts.

Intertextuality, a co-presence relation between several texts, usually by inserting one text into another (eg.: quote).

Metatextuality, relation between a text and another text without its actual presence (eg.: comments, criticism).

Architextuality, a "mute relationship of purely taxonomic affiliation" (to a genre, a theme, a school of thought).

We could then distinguish two kinds of links: direct or indirect ones.

Direct links are ones that can be quantified and structured algorithmically, which form the cornerstone of our analyzes of websites frequentation and their robots that peeling off the slightest web interstices in search of incoming and outgoing links.

These are the ones that articulates an opposition between a linear conception of writing on paper:

A more complex, hypertextual architecture of our digital documents : 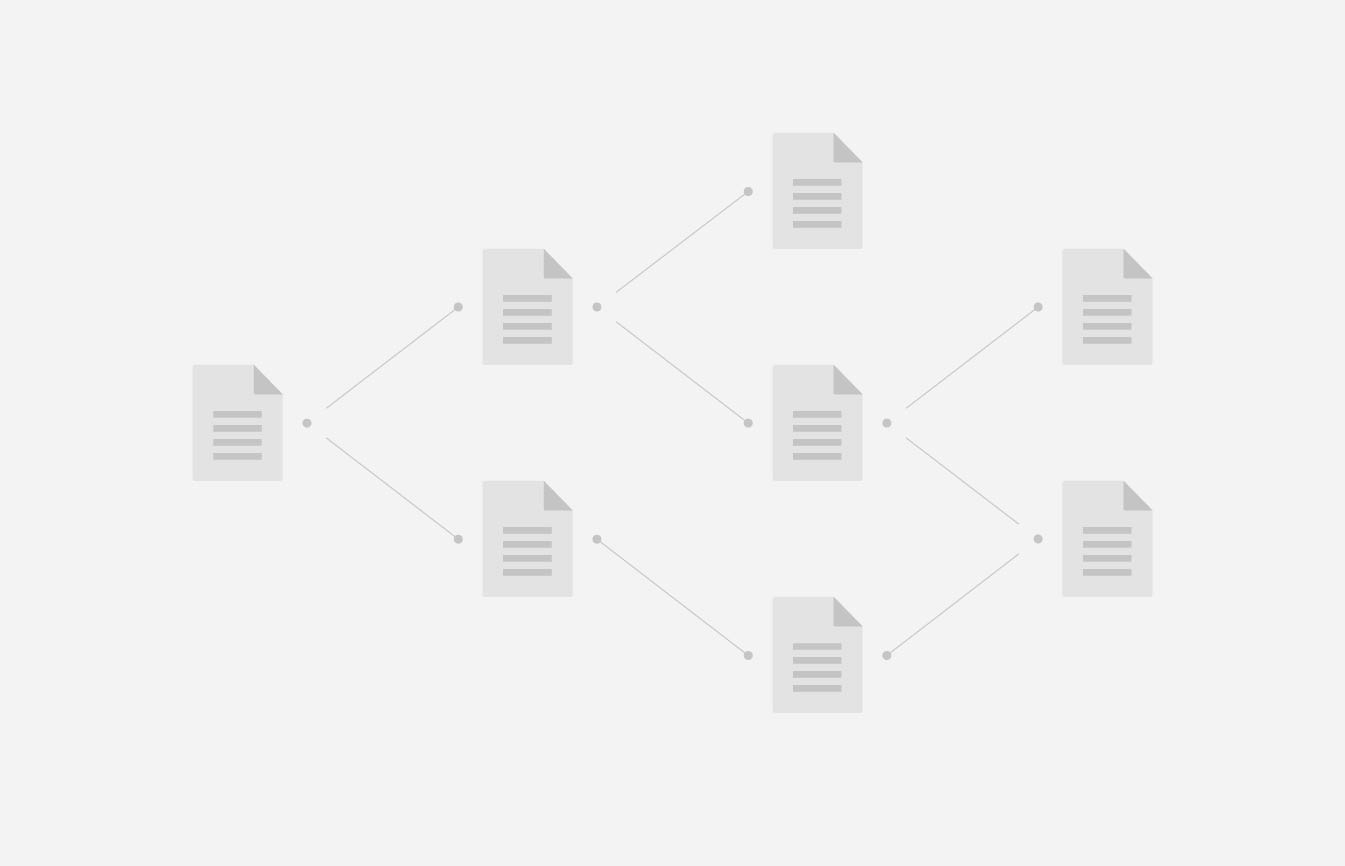 However this is only one of many connecting ways that this transtextuality suggests, which would rather lead to less quantifiable types of relationships, ones that TransFeed attempts to propose : 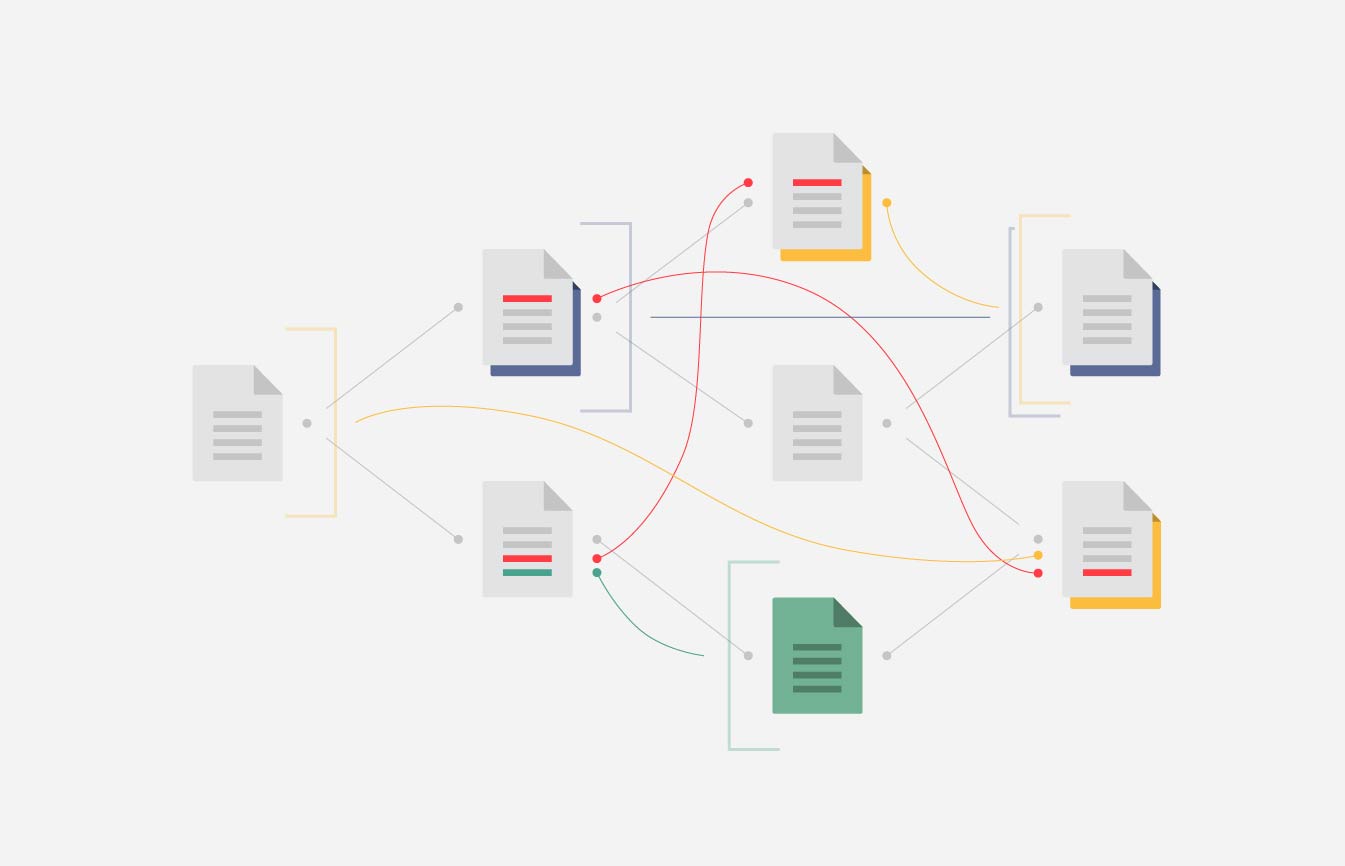 TransFeed is a work in progress, this website’s overview is likely to evolve.

A user profile is already there, and is shown when tagging articles for example. The will behind this is to make TransFeed a collaborative application, sharing reading lists and allowing several users to tag the same corpus.

Extensive tagging of a corpus could also benefit from a version-control system.

The possibility of enhancing those by taking notes is also envisaged.

TransFeed is a prototype and is only at its early beginnings. No release is currently planned, I work alone on this project. For any request or suggestion, please do not hesitate to contact me by mail, or via twitter.

The articles are quoted in a purely illustrative way. If their use proves to be problematic, please do not hesitate to contact me :